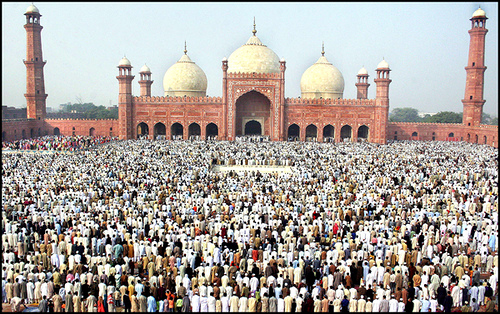 MV: Since Eid-al-fitr is approaching us soon or in some countries Eid has already approached but since I live in New York Eid is either on Sunday September 19 or Monday September 20 InshAllah..But either ways this article is a great review of how to prepare for Eid prayer:

Some important things to know/review before going to the Eid Prayer:

1. Eat before the Eid Prayer:

Anas (radiAllahu anhu) reported that the Messenger of Allah (salla Allahu alayhi wa sallam) would not set out in the morning of Eid ul Fitr until he had eaten some dates. (Bukhari)

2. Bathing before the Eid Prayer:

However, it is preferred and it is a sunnah of the Companions (that is, their way and guidance)..”ibn Umar (radia Allahu anhumaa) used to bathe on the day of Fitr.” 1

3. Going to the Musalla, Returning a different way

“When it was the day of Eid, the Prophet (salla Allahu alayhi wa sallam)

use to alter his route (of returning). (Bukhari)

“The Prophet (salla Allahu alayhi was sallam) used to change his route on the days of Eid, such that he went by one route and returned by another. It is said (he did this) to give salaam upon the people of both routes. Or so that both groups get some of his blessings. Or so that anybody who has a need can take care of it. Or to make manifest the ritual of Islaam….2

Shaykh ul Islaam Ibn Taymeeyah, when asked about the greeting/congratulations of Eid said: “As for the greeting on the day of Eid, then it is by saying to one another when meeting after the prayer:

May Allah accept it from you and us and other things of this nature.

Ibn Qudaamah reported in Al Mugnee that Muhammad ibn Iyaad said: “I was with Abi Umamah al Baahilee and other companions of the Prophet (salla Allahu alayhi wa sallam and when they returned from the Eid they said to each other:

May Allah accept it from you and us

Source: “The Rulings Concerning the Two Eids from the Purified Sunnah”

What do you do if you are late/miss the Eid Prayer?

From Saheeh Bukhari: “If one misses the Eid (prayer) he should pray two rakahs.” (to make it up)

Eid prayers is a confirmed Sunnah that Muslims, males and females, should be keen to attend. It is also highly recommended for women to participate and listen to the sermon. However, if a woman could not attend for some reason and performed it at home, it would be also valid.

The prayers of the two `Eids were prescribed in the first year after the migration. It is a confirmed Sunnah, as the Prophet (peace and blessings be upon him) always performed these prayers and he ordered the men and women to go out to attend them.