In an attempt of searching for something new to post, I found a picture of Prophet Muhammad'(PBUH)s sandal (on facebook of course). So a thought came in mind, well first I was just repeatedly thinking, “this is so cool”. Once that was over I started searching for other artifacts of the Prophet Muhammad (PBUH). I found many but they were all scattered in different sites, so what I then planned to do was put a lot of them on my site, as they are truly “really cool”.

And also, for the first time ever a book has been released with over 600 pictures of belongings from including Prophet Muhammad and other Prophets!  To check that out click here.

This is so cool! Prophet Muhammad’s sandal. 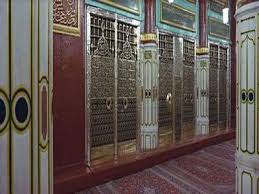 65 thoughts on “Artifacts of the Prophet Muhammad (PBUH)”