MV: In truth, you can make dua any moment of your life, but the times explained in this post are the greatest moments to supplicate. In Islam, Rasulullah (PBUH) made thousands of du’as to Allah (SWT). The times given below are the most essential times to supplicate: 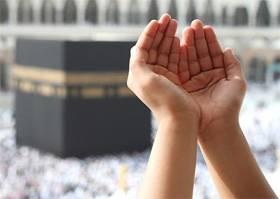 At that time, no Muslim makes a Dua but that it is answered, except for an adulteress who trades with her body, or a person who gathers his money unlawfully.” [Sahih al-Jami’ 2968]

2. At the time of Azan and between it and the Iqamah:
The Messenger (Peace and Blessings Be upon Him) said: “A Dua between Azan and the Iqamat is not refused, so make du’a at that time.” [Ibn Khuzaymah, Ibn Hibban]

On Friday after ‘Asr The Messenger (Peace and Blessings Be upon Him) said: “Friday has twelve periods. Among them is a period when no Muslim asks Allah for anything but He grants it to him. Search for that period late after ‘Asr.” [Sahihal-Jami’ 8402]

3. When it is raining:
The Messenger (Peace and Blessings Be upon Him) said: “Two kinds of du’a are not rejected: du’a at the time of the call for prayer, and du’a during rain.” [Abu Dawud]

4. Being a parent, while fasting and while travelling:
The Messenger (sallallaahu ‘alaihi wa sallam) said: “Three types of du’a are undoubtedly granted: a parent’s du’a for his children, du’a of a fasting person, and du’a of the traveller.” [Abu Dawud]

5. While Making Sujood:
The Prophet (Peace and Blessings Be upon Him) said: “The servant is closest to his Lord while in sujud, so ask Allah in that time.”

6. Laylatul-Qadr:
Sayyedah Aisha RA asked the Prophet (Peace and Blessings Be upon Him) What should I say on Laylatil-qadr? And he replied, O Allah, indeed you are a Pardoner,and you love pardon; so pardon me “Allahuma inaka afuuin tuhibul
afua Fahafu Anni”

MV: Hajj and Umrah are probably one of the best times to make Dua.

Specific Times to Make Dua During Hajj and Umrah

The Prophet [saws] said “The water of Zam Zam is for whatever it has been drunk for.”

“When the Prophet [saws] entered the Ka’bah, he made dua in all of its corners.”

Note: the semi-circular area (click here for image) is inside the ka’bah.

It is narrated that the Prophet [saws] would make long dua’s at Safa and Marwa.

It is narrated that the Prophet [saws] would stone the small Jamarah and then face the qibla, raise his hands and make dua for a long time. He would do the same thing for the middle Jamarah. Then, he would stone the big Jamarah and leave without making dua.

The Prophet [SAWS] said, “There is no day in which Allah frees greater number of His slaves from the Hellfire than the Day of `Arafah.”

MV: It is quite amazing that these times are all very powerful moments in a Muslim’s life, and also that a good amount of these moments happen very often and some even daily.  Such as sujood,  as Muslim’s we pray 5 times a day and the opportunity t o make du’a during this time is a time to take advantage of.

The Last Third Of The Night :
Abu Hurairah (RA) narrated that Allah’s Messenger (SAW) said: ‘In the last third of every night our Rabb (Cherisher and Sustainer) (Allah (SWT)) descends to the lowermost heaven and says; “Who is calling Me, so that I may answer him? Who is asking Me so that may I grant him? Who is seeking forgiveness from Me so that I may forgive him?.”‘ [Sahih al-Bukhari, Hadith Qudsi]

Amr ibn Absah narrated that the Prophet said: ‘The closest any worshipper can be to His Lord is during the last part of the night, so if you can be amongst those who remember Allah at that time, then do so.'[at-Tirmidhi, an-Nasa’i, al-Hakim – Sahih]

Late at night:
When people are sleeping and busy with worldly pleasures Allah (SWT) gives the believers an opportunity, or an answer hour if they can fight sleep and invoke Allah (SWT) for whatever they need. The Prophet (SAW) said: ‘There is at night an hour, no Muslim happens to be asking Allah any matter of this world or the Hereafter, except that he will be given it, and this (occurs) every night.’
[Muslim #757]

An Hour On Friday:
Narrated Abu Hurairah (RA): Allah’s Messenger (SAW) talked about Friday and said: ‘There is an hour on Friday and if a Muslim gets it while offering Salat (prayer) and asks something from Allah (SWT), then Allah (SWT) will definitely meet his demand.’ And he (the Prophet (SAW) pointed out the shortness of that particular time with his hands.[Sahih al-Bukhari]

When Waking Up at Night:
Narrated Ubada Bin As-Samit that Allah’s Messenger (SAW) said: ‘Whomever wakes up at night and says La ilaha illallahu wahdahu la shrika lahu lahulmulku, wa lahul hamdu, wa huwa ala kulli shai’in qadir. Alhamdu lillahi, wa subhanallahi wa la ilaha illallahu, wallah akbir, wa la hawla wala quwata illa billah (none has the right to be worshipped but Allah (SWT) He is the only one who has no partners. His is the kingdom and all the praises are for Allah (SWT) All the glories are for Allah (SWT) And none has the right to be worshipped but Allah (SWT) and Allah (SWT) is the most Great and there is neither might nor power except with Allah (SWT) and then says, Allahumma ighfir li (O Allah! Forgive me) or invokes Allah (SWT), he will be responded to and if he makes ablution and performs Salat (prayer), his Salat (prayer) will be accepted. [Sahih al-Bukhari]

Dua during the month of Ramadan:
Ramadan is month full of many blessings, thus the du’a of Ramadan is a blessed one. This can be inferred from the Prophet (SAW) saying: ‘When Ramadan comes, the Doors of Mercy (another narration says Paradise) are opened, and the doors of Hell are closed, and the Shaitans are locked up’ Thus, it is clear that du’a during Ramadan has a greater chance of being accepted, as the Gates of Paradise and Mercy are opened. [Sahih al-Bukhari #1899, Muslim #1079 and others]

Dua of the one fasting at the time of breaking fast: The prophet (SAW) declared, ‘Three men whose dua is never rejected (by Allah) are: when a fasting person breaks fast (in another narration, the fasting person until he breaks his fast), the just ruler and the one who is oppressed.'[Ahmad, at-Tirmidhi – Hasan]

MV: Subhanallah! These are some more times that are said to be the best times to make du’a, but remember that one can make du’a at any location and at anytime. Though do not forget it is said by the Prophet (PBUH) that these times are by beyond comparison the perfect times to supplicate to Allah (SWT). So the next time you make du’a you can do it at anytime, and if you end up doing it at one of these times then you are in luck!

9 thoughts on “The Best Moments to Make Du’a”