MV: We at the Muslim Voice are very saddened by the news about the recent shootings at a Sikh temple. I agree with a lot of the Islamic scholars around America who request that we as Muslims should give support to the Sikh community. Its our chance as Muslims to help out our friends of the other community in order for others to do the same for us. ICNA and a variety of different speakers have been showing their support to the community. See what they said:

Various Islamic scholars and Imams have updated their Facebook statuses with the following: 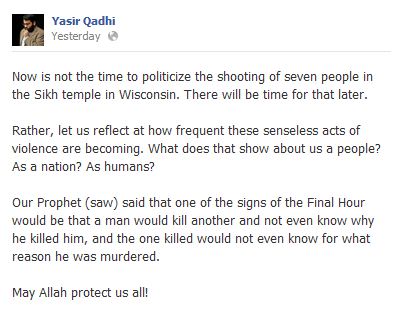 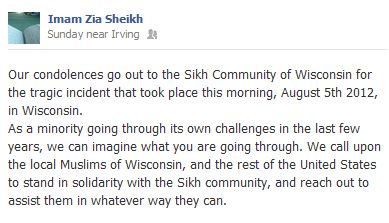 While ICNA updated their site with this notice:

JAMAICA, New York (August 5, 2012) – The Islamic Circle of North America (ICNA) issued a press statement condemning the shooting at a Sikh temple in Wisconsin this morning.

A gunman opened fire at the Sikh Temple of Wisconsin in Milwaukee, killing six and wounding many others. A police officer was also among the wounded.

“We are deeply saddened by the attack in Milwaukee this morning. Our thoughts and prayers are with the victims and their families, and we are praying for the speedy recovery of those wounded in the attack.

We thank law enforcement officials for acting quickly to protect the congregants and commend the brave officer who took down the assailant. We urge law enforcement to fully investigate the incident.

ICNA calls on people of all faiths to condemn this heinous act and come together in support of the Sikh community.”

The Islamic Circle of North America is a leading American Muslim organization dedicated to the betterment of society through the promotion of Islamic values. Since 1968, ICNA has worked to build relations between communities by devoting itself to education, outreach, social services and relief efforts.