MV: Thanks ICNA for the find. 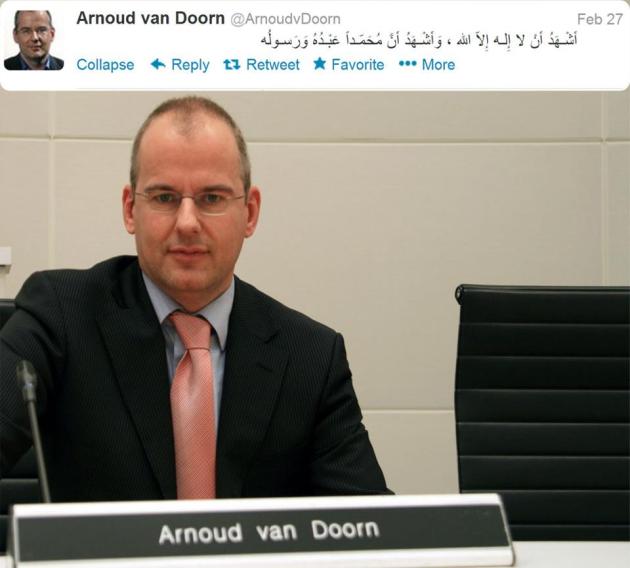 Arnoud posted a tweet in Arabic declaring his Shahadah (Testimony of Faith). Given his previous negative views on Islam, Arnoud’s story was a shock to many who doubted and harshly criticized the announcement, which is still a subject of debate on twitter. In another tweet, he expressed his grief and discomfort with “the many hateful comments on social media”.

Arnoud’s account was deluged with hundreds of followers and positive comments backing and congratulating his choice.

We welcome Arnoud to Islam and ask God to guide him to His right path.

In an interview with Al-Jazeera.net, Doorn confirmed the news of his conversion. “For more than a year now I have been learning deeply about Islam through books and talks.

“No doubt, other than those close, many are shocked by the decision, particularly those who know of my anti-Islam stands. And this is why they are questioning it.”

On the grounds for his decision Arnoud explained: “I am a person who is looking beneath the surface of things, so I judge them not according to the appearance or just what’s said and heard.

“After communicating with a Muslim colleague at The Hague’s city council- and after long discussions in fact- he directed me to the Sunni mosque where I was embraced with all kindness and affection. My decision came later as I freely embraced Islam. And it is one of my own, out of the question.”

And on quitting a party known with its open enmity against Islam, and being at time one of its voices, Doorn said: “We all make mistakes. But, regardless of that, I see for every life experience there’s a meaning. And my own experience has its relevance to my new choice.”

“I’ve learned so much from such experience. And I believe it is the reason why I am a Muslim now. It is a new beginning of my life I ask God to guide me through”, he concluded.

MV: Amazing how the people who once hated Islam can enter Islam, Allah swt guides who He wills. May Allah swt bless Br. Arnoud with the best, Ameen.