MV: 4 days of living in the open atmosphere along with over a hundred Muslims, what a great experience subhan’Allah. This weekend I got the opportunity to attend a camp organized by MYNA (Muslim Youth of North America), for the first time.

The camp was a completely different experience (being my first camp ever), it was unlike any Islamic event I’ve attended before. I’ve attended MIST (Muslim Inter-Scholastic Tournament), the ICNA Convention, and an Al-Maghrib seminar, and have to say that MYNA camps are very unique. For one, the camp was almost completely organized through the youth (some as young as Middle School), from the event hosts to the setup. This is very impressive knowing that this was a weekend long camp. No fobby uncles or aunties were seen! Another obvious thing to note was that with being a camp, MYNA helps create very strong bonds with other attendees. Obviously the reason being since everyone is around each other, day and night, many times with people you may not know from before. Being that close really does have an impact after you leave the camp, some of the habits and behaviors of people sprinkle you with influence.

Highlights include (note these are highlights from the camp I specifically attended): 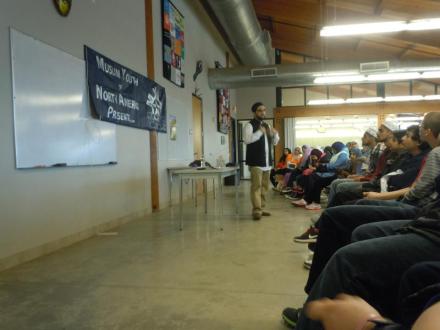 Hafidh and Dr. Kamran Riaz. Masha’Allah – This guy is not only a Eye Surgeon, but also almost a qualified Shaykh. Studied and Mastered both Alim course and med school side by side!

Shaykh Islam – Another amazing speaker. Not only had an amazing Qiraat, but also heartbreaking talks on Jahannam and Jannah.

2. The EPIC bonfire halaqa on Jahanam

Half way through his lecture, the lights and mic started flickering and eventually turned off completely. Outside you could see continuous lightning with a loud sound of thunder. Behind the Shaykh was fire. Made a talk on Jahannam ever more intense and heart pounding subhan’Allah.

3. Building strong bonds between everyone

9…and of course the amazing organizers who dealt with hours of work, sleepless nights, and keeping mad sabr to help bring the camp together and live for us.

MreView: Was the camp worth the time?

The camp was in no doubt an amazing experience, one that will be remembered for years. However, that’s not to say that there weren’t any

For one, the schedule and organization aspect had some room for improvement. A lot of times I felt as if some of the activities were rushed (such as Archery and open spaces) and while other times some were very stretched out and dragged on. Especially the time period after breakfast, lunch and dinner, a lot of time would be spent on doing almost absolutely nothing, while that time could have been spent on another activity. This wasn’t to say, entirely the fault of the organizers, as day light savings was overlooked and the storm took up a few activities (such as canoeing for brothers), but at the same time, a back up plan should have been ready and for the other days the schedule should have been cut a little shorter. There were some high expectations out of the campers. Our schedule was so that we would sleep relatively late and then wake up early for Fajr (6am) and stay awake the rest of the day. The schedule was so that the lectures would take place right after breakfast and most kids would fall asleep during the lecture. Don’t get me wrong, waking up for Fajr and then not sleeping is a great habit, but again, going back to the point about time slots; we had have long waits, delays, or no activity, if those were cutback we could have more time to end early, sleep early, have good rest, and be ready and awake the duration of the next day. Also, out of the high expectations of the campers came also the long walks in the cold to different locations at the camp. Some locations were VERY far and the weather was freezing! I believe that some sort of transportation from one building to another would have been beneficial to the campers, who again, were not all rested and could have had a chance of becoming sick due to the weather.

All drawbacks aside, the camp was truly amazing subhan’Allah. From the great bonding experience to the amazing life lessons, the camp gave a feeling of how united our ummah really can be and how being a Muslim youth is actually pretty cool.  Through the camp,  I met some amazing people, Muslim youth, with amazing potential. I was very impressed to see a whole weekend long camp organized all by the youth, for the youth. It was all through the dedication and hard-work from the youth that the camp was this successful masha’Allah.

With that being said… 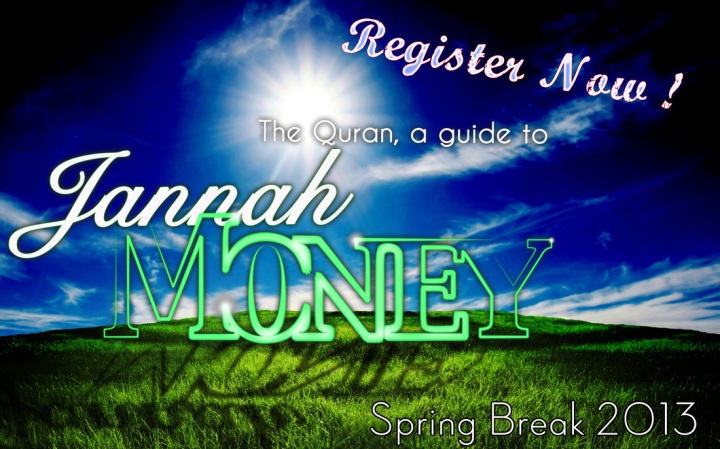 May Allah swt reward the orgizers all for the great work, Ameen. Looking forward to the next camp insha’Allah!

We’re all gonna get some mad Jannah money insha’Allah